On August 24th, a jury in a federal court in California ruled that Samsung had violated some of Apple’s patents and awarded $1 billion in damages to be paid by Samsung – the amount that might be easily tripled. 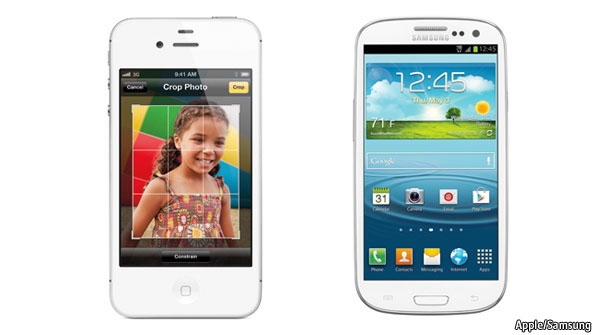 The Economist discusses implications for the tech world:

The outcome of the case will have significant repercussions in the tech world. For a start, it will encourage Apple to lob even more lawsuits at firms it believes are ripping off its intellectual property. It will also encourage other companies that make smartphones and tablets either to license patents from Apple or to modify the design of products to minimise the risk they will be hit with lawsuits too.

Leaving aside the battles of tech giants, what does the verdict mean for the start-up companies?

Things that set start-up companies apart: 1) no money to license patents from Apple; 2) no money to hire lawyers to go obsessively over the similar patents. It is the nightmare of tech start-up founders to have an established company like Apple fill out the court case; in many cases, the company is done.

However, on the good side of things, defensible patent law means more innovation and variety. Start-ups might realize that patents actually hold value (also the opinion of TechCrunch) and are worth protecting in the court.

But what about the risks? What if the defensible patent law means companies like Apple will sue little start-ups, leaving no place for innovation in the first place?

Robert Scoble advises the start-ups to calm down:

“I think this is actually a sizable win for Samsung. Why? It only cost $1 billion to become the #2 most profitable mobile company….I bet that RIM wishes it had copied the iPhone a lot sooner than it did. So does Nokia, and HTC and a raft of other manufacturers I bet. Samsung is a much healthier company than any of those BECAUSE it copied the iPhone.”

That might be true for bigger companies like Samsung that can afford going to court with Apple, in the first place. If you’re a young tech exec, having Apple bring up a lawsuit against you is your worst nightmare. Such lawsuits might be possible to win, but impossible to survive for young companies that barely have the money to hire lawyers in the first place.

US Patent law is certainly complicated, and perhaps there is a need for an easier solution that would be friendlier towards start-ups. What do you think it could be?

12345
0 #49 Leonor 2015-02-24 02:05
you're really a good webmaster. The website loading speed is
incredible. It sort of feels that you're doing any distinctive trick.
Moreover, The contents are masterwork. you've performed a magnificent activity on this topic!


Stop by my site :: cialis canada
pharmacy
Quote
0 #48 Preston 2015-02-23 21:22
Do you have a spam issue on this site; I also am a blogger, and I was
wanting to know your situation; we have created some nice procedures and we are looking to swap techniques with other folks, please shoot me an e-mail
if interested.

Brief but very accurate info… Thanks for sharing this one.
A must read article!

(from what I've read) Is that what you're using on your blog?


my homepage; cheap viagra canada
Quote
0 #44 Monique 2015-02-15 14:11
Please let me know if you're looking for a author for your blog.
You have some really good articles and I believe I would be a good
asset. If you ever want to take some of the load off, I'd really like to write some articles for your blog in exchange for a link back to
mine. Please shoot me an email if interested. Thanks!

my webpage; walgreens drug store
Quote
0 #43 Margherita 2015-02-13 04:24
I am actually thankful to the holder of this web
pahe who has shared this fantastic paragraph at aat
this place.


my web site - buy cialis from canada
Quote
0 #41 Alejandrina 2015-01-22 20:38
The Commonly used pharmacy is definitely inexpensive regardless if you are from regardless of what parts of the modern society.
The price is reasonable for anyone and everyone; you might want to aspiration of getting it.
At one time final decision is created, look at the ideal shop.
Subsequent to purchasing remedy, you may have used
it. Just consume the pills with ordinary mineral water.
canadian pharcharmy online

my web page; cialis canada pharmacy
Quote
0 #40 Barry 2015-01-21 12:23
An outstanding share! I've just forwarded this onto a colleague who has been doing a little homework on this.
And he in fact ordered me breakfast simply because
I discovered it for him... lol. So let me reword this....
Thanks for the meal!! But yeah, thanx for spending the time
to discuss this issue here on your blog.