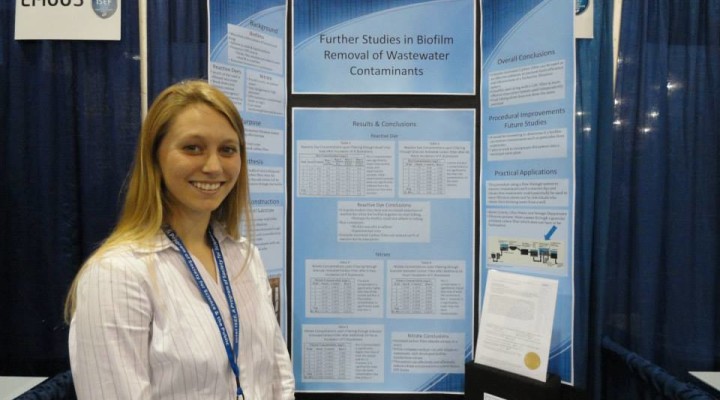 Written by Alicia Czarnecki, student at the University of Notre Dame!

When Monica McFadden, Environmental Engineering Class of 2017, University of Notre Dame, was searching for colleges she was specifically looking for a place where she could be involved in research as an undergraduate student. At Notre Dame, McFadden is already involved in research at the Environmental Biotechnology Laboratory under Dr. Robert Nerenberg, doing research on the de-nitrification of wastewater using biofilms grown on sulfur particles.

“The main idea is bacteria uses the nitrate as the terminal electron acceptor”, explains McFadden, “and the sulfur is the electron donor so in an oxidation-reduction reaction it converts the nitrate, which is harmful to human health, into harmless atmospheric nitrogen.”

A biofilm is a colony of bacteria that is enclosed in a protective extracellular matrix or membrane that protects the bacteria from things that could kill it, “like the plaque on your teeth or the buildup in your shower drain,” says McFadden. Biofilms have been McFadden’s interest since high school, where she performed a 4-year research project involving biofilms as bio-barriers to remove contaminants from wastewater.

In high school, her project consisted of growing bacteria colonies on various substrates (such as sand, glass beads and carbon filter) in film and running water through it to remove nitrate, reactive die or beta estradiol, three major pollutants in wastewater. “My motivation for doing the project in high school was that where I lived, we get all of our drinking water from the Ohio River,” McFadden explained, “There are a lot of factories along the river that use reactive dies to die fibers, as well as a lot of beta estradiol in the river.” Beta estradiol is an estrogen derived from pharmaceuticals that causes a lot of problems in ecosystems, for example the feminization of male fish.

McFadden’s high school project succeeded in removing all three contaminants from wastewater, and her senior year was spent making the system more efficient. Her goal was to eventually introduce the system into a water filtration system that would improve water purification for her community.

When she was looking for colleges, McFadden met Dr. Robert Nerenberg of Notre Dame on a visit to campus. Dr. Nerenberg told her that there are opportunities at Notre Dame available for students to get involved in research even as freshmen. “It sold me on Notre Dame. I was debating between two schools, but I walked out of that meeting knowing where I was going to go,” remembers McFadden.

“I chose Notre Dame because I can do research,” says McFadden, “Notre Dame in general really promotes Environmental Engineering. It is a brand new major, but the University still have a lot of drive for it.”

In January, Dr. Nerenberg paired McFadden with graduate student Yue Yang, who is pursuing her doctorate in Environmental Engineering. McFadden had the opportunity to start her own research under the guidance of a graduate student or help with a current project. She chose the latter, saying it would give her a good opportunity to get her foot in the door and learn lab techniques under someone who is more experienced so she would know more and do better work when she starts in on her own projects. “I’ve been really lucky to be able to see the techniques that she uses and the engineering that goes on in her project so that when I do begin my own research I can implement that way of thinking,” says McFadden.

Toward middle of the Spring semester, Dr. Nerenberg encouraged McFadden to apply for a Clare Boothe Luce Grant.  The Clare Boothe Luce Program is a national foundation that encourages women to pursue opportunities in science, mathematics, technology and engineering. McFadden received a grant to do summer research in Environmental Engineering with Nerenberg’s lab.

With the grant, McFadden is going to research the use of paracetic acid on the disinfection of viruses that are present in combined sewer overflows. This project has a lot of implications in the city of South Bend, IN, which is the city nearest to Notre Dame’s campus. “I am excited to work on something that is applicable to the new community in which I live,” states McFadden.

“South Bend is not a very well off community, and they do not have much money to put into infrastructure,” McFadden says. She explains that the city has a very simple sewage system, where both storm water and wastewater are collected in the same pipes, so both rainwater and runoff, and sewage discharge from homes/businesses. This can cause a big problem for the city in heavy rain or snowfall, because it is hard for the system to handle such a big flow, and with sewage in the mix it can be problematic.

Amanda Shockling was an undergraduate student at Notre Dame who received the grant last year and worked on bacterial disinfection. This year, McFadden is furthering that research in determining the effectiveness of paracetic acid on viral disinfection.

Last summer, Shockling furthered the methodology for bacterial disinfection, so a lot more is known about that process. “We’re not sure yet how to go about developing viral methodology,” says McFadden. “I have contacts at the University of Michigan that have been doing similar projects, and they’re pretty far in the methodology so I’ll be in contact with them and possibly go visit this summer and learn their methods.”

If her project succeeds, the group will be pretty far in developing a more sustainable and cost effective way to disinfect the city’s water. This new method can be implemented into the current infrastructure, which doesn’t require South Bend to build anything new.

“Right now, South Bend spends a lot of money on this that can be put into other places. If we can reduce the cost of sewer disinfection, we can help the city further development in other areas where it is needed,” McFadden comments.

McFadden will be living in South Bend this summer to conduct her research. “I am excited because my main goal is to impact the community, and up until this summer I haven’t really had a chance to get out and experience and get to know the community,” McFadden states.

“I think I will really enjoy this project,” says McFadden, “I like having an impact on the community where I am; that was my motivation in both my high school and current projects.” Although she doesn’t really understand everything quite yet since she hasn’t started work on the project, McFadden is sure that she wants to continue doing her own research in this field because that is what she wants to do as a career.